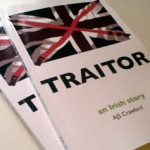 In the middle of the Irish War of Independence (1919-1921), the tiny fishing village of Castletownshend, County Cork, has an informer in its midst. The British seem to know the time and location of every IRA gun-running operation and everything points to young Brendon being the rat. But in times of war nobody can afford to be exactly who they seem, and it’s not long before Mick, the local IRA commandant and father of Brendon’s fiancée Mary, becomes the prime suspect.

Set during some of the most turbulent years of Irish history, Traitor: A Story of Irish Freedom interweaves the fates of ordinary Irish freedom-fighters with those of revolutionary leaders like Michael Collins and Éamon de Valera. In this sophisticated analysis of what it means to be a traitor, A.J.S. Crawford explores the fine line between loyalty and betrayal.

Read an extract from the Book
Buy the Book